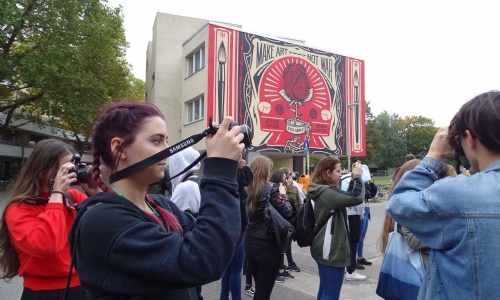 This years Art and Photography trip was to Berlin, a modern city and a leading centre for the Arts, especially renowned for its contemporary architecture and museums. Dating back to the 13th century, reminders of the city's turbulent 20th-century history include its Holocaust memorial and the Berlin Wall's graffitied remains. Divided during the Cold War, its 18th-century Brandenburg Gate has become a symbol of reunification.

After a trouble free journey we arrived at Hostel Friedrichshain our accommodation for the next three nights. A quick turn around and we were on the train to Alexandra Platz to see the Berlin TV tower or Fernsehturm constructed between 1965 and 1969 by the government of the GDR as a symbol of communist power and Berlin. Luckily our visit coincided with the Berlin festival of lights and we were treated to a fantastic light show on the tower before heading off for a well-deserved evening meal.

The morning was spent at the Berlinsche Gallery which is organized thematically and tells the history of art in Berlin
with varying emphases. Students studied a range of works including Dada Berlin, the Neue achlichkeit (New Objectivity) and the Eastern European avant-garde. On route to the gallery we enjoyed a photo opportunity at Checkpoint Charlie, the crossing point between East Berlin and West Berlin during the Cold War.

The Gemäldegalerie was our focus for the afternoon. The gallery forms part of the Kulturforum which launched the cultural rebirth of West Berlin after World War II. In the gallery students studied the works of Hans Holbein the Younger, Botticelli, Jan Van Eyck while others made sketches and notes for follow up work back at school.
In the evening a small number of students expressed an interest in seeing Berlin by night from the top of the Fernsehturm (TV Tower). After such a busy day we returned to the Hostel and spent the evening exploring the local area.

Another early breakfast and we headed towards Uhlandstr to the Kathe Kollwitz Gallery which is well known for her prints and charcoal drawings of poverty, hunger and war among the working class. The gallery gave students the opportunity to look beyond the artwork and to gain valuable insights into the mind of the artist and political events of the day.
After lunch and in sharp contrast to Kollwitz we headed to the National Museum of Photography. Here students had the opportunity to view the work of Helmut Newton and others and to see at first hand the quality of one of the most well known fashion photographers of his age. The day ended with a visit to the Reichstag at sunset to experience the fantastic Norman Foster dome. This was without doubt one of the highlights of the trip.

After packing and leaving our cases for collection later we headed back to the centre of Berlin to visit the Holocaust Memorial and took time for some personal reflection on the Jewish victims of the Holocaust. Our final destination before returning to catch the coach to the airport was the East Side Gallery. At 1316 metres long, the open-air art gallery on the banks of the Spree in Friedrichshain is the longest continuous section of the Berlin Wall still in existence. Reflecting on the purpose of the wall students collected souvenir’ and recorded some of the amazing graffiti created by international artists immediately after the wall came down. In three and a half days we experienced the life culture of Berlin but only scratched the surface on the complexity and turbulent life of this exciting and vibrant capital city.

Students are now planning their Berlin responses for an exhibition to coincide with the Sixth Form Open Evening on 16th November.