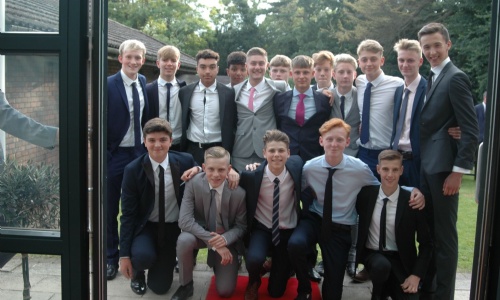 The Chalfonts Community College PE Department recently held the sixth annual Sports Awards Evening at Denham Grove. Designed to recognise the fantastic commitment, time and effort our students put into all the sports teams here at the school, the evening was once again, a great success.

As PE teachers, we really value the time the students give up to practiise and compete for our school teams. This year the students have competed in a combined total of over 200 fixtures including netball, football, gymnastics, athletics and more. As a thank you, we organised this ever growing, prestigious event that is invite only and limited to a select few lucky students per year group due to the venue capacity. A huge well done and thank you is extended to all the students of The Chalfonts Community College who represented our school in any sporting event!

Sportsman and Sportswoman of the year went to Max Mcgarvie and Rachael Parker. Congratulations to both of them.

Max is the youngest student to have received this award. Over the years he’s given up countless hours to play for and represent the school at local, district, county and national level. He has shown fantastic eadership, outstanding performance across many sports, commitment and willingness to support PE wherever possible. He is also a hard worker, a top performer within BTEC Sport and generally a fantastic role model to others. He has been an important part of a District and County Cup winning football team, represented the school in cross country (finishing as the 2nd quickest runner in the County) and in swimming he was part of the 10th quickest relay team in the Country. The list really does go on and on.

Rachael has been an exceptional athlete and performer, representing the college at regional and national level on a number of occasions. This year in the U19s Girls Gymnastic team she competed against girls who are two years older than herself. She has taken on a coaching role and has been exceptionally helpful and supportive to our younger gymnastics. This has involved teaching the gymnasts new skills, choreographing their routines and supporting them at competitions. Her leadership skills have also been applied to working as a sports leader at primary school festivals. We wish her all the best with her next journey after GCSEs.

We also thanked Annie Morris, Katie Dore, Hans Do Oma, Otto Summerall and Jamie Woods who gave up time week
in week out to help the department. We really do not know what we would do without them!