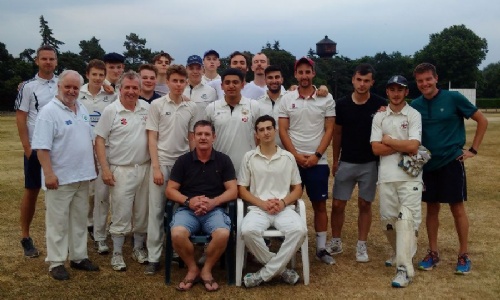 With humidity levels reminiscent of scenes from the film 12 Angry Men, 12 angry men took to the field at Coleshill. In an era of fake news, WAY engineered a fake toss so that the 6th Form could bat first and ensure that we weren’t home in time to watch Eggheads.

Sixth Formers were given the opportunity to ‘retire’ if a player scored a lot of runs to allow more players to get a bat; a ruling that didn’t need to be afforded to us, although there are a few of us who many think should be retired! As you would expect in the era of twitter there was plenty of ‘chirp’ on both sides but the sledging was always carried out in the right spirit which I think says a lot for our students. The 6th form amassed 157 in 20 overs with runs from Tom McLeod and Llewelyn Woodman. Leybourne, our mystery spinner - it’s a mystery how he got so many wickets – was the pick of the bowlers with 3 wickets.

It was always going to be a challenging target and runs from Harding, Puni and Leybourne, plus more extras than a Ricky Gervais series ensured a semi respectable total of 99 all out. Ultimately though, camaraderie and the spirit of cricket were the winners!

Thank you to the staff who came to watch, and to the Ansell clan for the cream tea.
Martyn Way, Head of Sixth Form