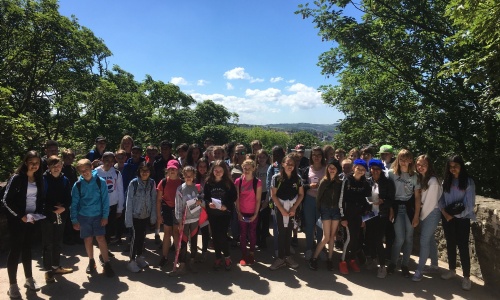 On the day we went to France we were all really excited as we jumped on the coach and then onto the ferry. When we got onto the ferry we had a look at where everything was and our meeting points and then got to explore. In France, the first place we went to was the market where there were loads of shops and stalls. By then we were all hungry and went to the beach to have lunch where we took loads of pictures and drew in the sand. After that we got on the coach and went to the bakery to see how traditional bread is made and we were given croissants at the end. Then we went to a massive shopping centre and bought our dinner. Finally we got back on the ferry and the coach and got home at around 11:00pm. I even won a baguette during Mr Quéré’s quiz on the way back. I enjoyed France.
Simran Pawar

On the 22nd of June 2018 I went on the French trip to Boulogne which is on the north coast of France. We made our way on the bus at 4am in the morning with 49 other kids and 5 teachers; it took over 2 hours to get to Dover to catch the ferry over to Calais. When we arrived in Calais it took 30 minutes to get to Boulogne and the first thing we did was go to a local village and we spent some money on the stalls and some of the shops. After that we had a walk round the village then we went to the local town and sat down on the steps of a local church for a rest. We then headed off to the beach and had a little dip in the ocean (just our feet). Then we dried ourselves off and headed to a bakery. When we arrived, we went in groups inside and a baker told us the ingredients we need to make bread. Afterwards we went to a
shopping centre and my friends and I had dinner. Then we went back to the bus and got the ferry back to Dover then back to school. What a day!
George Sil

On Friday 22nd June, 50 Year 7 students went on a trip to France. We drove down to Dover to get on to a ferry to take us to France. On the ferry we were allowed to walk around. When we arrived in France we drove to Boulogne where we had to complete an activity booklet. This included things we had to find or do, such as taking a picture of a French post box or ask for something in French. We then went to the beach where we had our lunch. Then we went to the bakery and watched Bruno “le boulanger” make bread. The traditional oven he uses is over 150 years old. Luckily we got to try some of the bread and pains au chocolat. We then went to have dinner in Cité Europe which is a huge shopping centre. Finally, we got back on the ferry and headed home. It was such a great day. We walked so much; I must have done 25 kilometres. As we were tired some of us fell asleep on the coach.
Katie Hardy

On Friday 22nd June, we Year 7s started our exciting journey to France. We arrived at school at 4am and started our bus journey to Boulogne at 4:30 am. Whilst on the bus we played games and listened to music. We estimated that the drive would take at least 2 to 3 hours. We made our way onto the ferry and picked a meeting point. Then we walked around the ferry and explored the shops. After an hour we could see the French coast. Once in France, our first stop was the old town where we completed our booklets. The first challenge was to buy something French and try it. Some bought pastries and others bought and ate snails. After this, we made our way to the beach to eat our lunch and then play and have some fun in the sand. At the bakery, Bruno the baker taught us how to make bread. We bought some real French bread to bring back to our families. Yummm! On the way back we had to answer lots of questions during the quiz and people won lots of prizes. This was our best experience in Year 7 so far!
Ellie and Bailey 7K3