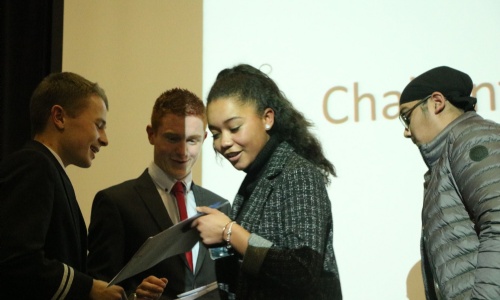 One of the most rewarding parts of being in education is to celebration the achievements and successes of the young people in our community. On Thursday 15th December we held the annual Presentation evening in the Sue Tanner Hall.

All students in Year 13 last year were invited back into the school to receive their A-level and BTEC certificates and the Year 12 to receive their GCSE and other level 2 awards. Prize winners were nominated by staff for outstanding effort, achievement and progress so it was a truly inclusive event. There were also the Chalfonts College prizes awarded to outstanding individuals or groups (such as our channel relay swimmers).

As the hall filled with students (present and recent leavers), their parents, governors, staff and other guests, it was great to see people catching up, with many students being back from their further studies around the UK. The atmosphere was really positive as certificates and prizes were awarded with each receiving the applause of their peers and parents/guests.

The guest speaker was a former student, George Baker (CCC 2006-2013), who is now a pilot with Easy jet. He explained how he trained and the career path that he has taken so far, including a video of some of his training and some in-flight photos. He certainly modelled what Chalfonts’ students can go on to achieve and I echo his comments about choosing a job where you are ‘doing something you love; it never feels like hard work if you enjoy doing it’. I can honestly say he is one of the best speakers that I have heard at such events and I hope inspired a few of our students to aspire for great things.

The evening was interspersed with a couple of musical pieces (Never Forget You and Uptown Funk) performed by the ‘School of Rock’ band consisting of Macy Owen, Ryan Grover, Will Salter, Josie Coyle and Sophie Bowler to which I found myself tapping my foot along to the music.

Many thanks to the team of staff that helped organise this event, polish trophies and collate certificates, and also to all those that attended the evening. I hope you enjoyed it and we look forward to welcoming many of you to such events in the future.