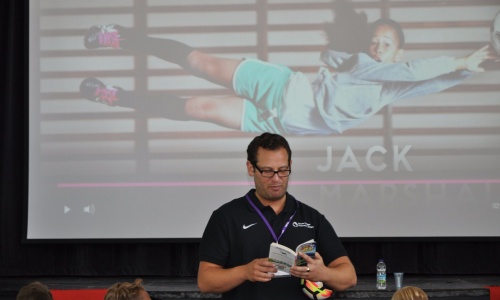 Dan talked about his journey from being a football fanatic at school (just like so many of our students); to working as a journalist with the England football team and becoming an author of football based books.  His presentation had us all thinking about the journey from football fan to published author, career aspirations, interviewing people and the importance of never giving up.

He described what it was like to have a blank piece of paper or flashing cursor in front of him and the expectation to write something ‘creative’. He said it always helped if he started writing down his thoughts, however random, which led him to begin processing ideas and building upon a theme which he continually changes and amends.

Dan based his talk on questions from our students; he told us we were his ‘bosses’ and our thoughts and opinions contributed to the books he wrote and how Jamie Johnson was portrayed in the television series. The questions our students asked were well thought out, provocative and led to meaningful discussion. Dan played a number of clips to support his answers; we saw a very young looking David Beckham, Rio Ferdinand, Wayne Rooney and John Terry from the days when Dan was the official journalist for the England football team.

Year 7 students were fortunate to receive a copy of Dan’s book ‘Born to Play’ which Dan read from, stopping at a
cliff-hanger. Hopefully, students will have read the book over the summer holidays and be happy to discuss it in their
English class.

It was a fun and inter-active session, for both boys and girls; Dan’s passion for sport was infectious. Judging by the
conversations which took place as Dan signed copies of ‘Born to Play’, the presentation engaged students and left them wanting to read and write creatively and possibly encouraged them to think about their futures.
Andrea Gilbey, Learning Research Manager