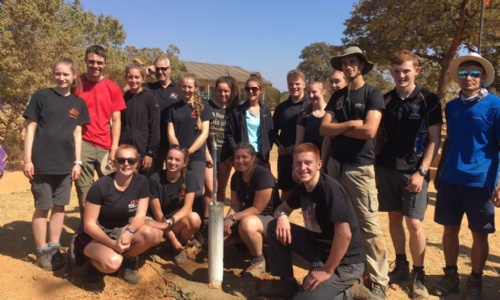 At the end of July we took fourteen students from Years 11 to 13 to embark on a three week trip of a lifetime to Zambia.

During the trip our community project was based at a school where, when we arrived, they had no running water. By the end of the project our students had supported in installing a new water pump and installed 6 new taps around the school site. This meant digging trenches for the pipes and connecting the pipe work - we never dreamt we would be becoming plumbers for four days! Our students took everything in their stride and worked extremely well as a group to complete the project. The school were delighted and a highlight of the trip for many of was seeing the school children’s faces when they saw they had running water.

We also embarked on a four day trek, which turned out to be the hardest and most demanding thing any of us had ever done. Not only was it physically draining, but mentally and emotionally too. The trek took place in Batoka Gorge, where the terrain was very unstable and difficult. We spent the majority of the time walking/jumping from boulder to boulder, with our large and heavy rucksacks on our backs. The group then spent trwo nights sleeping under mosquito nets, joined by the local wildlife (including mice, snakes and baboons!).

Other activities undertaken on the trip included:

After being away for just over three weeks the students were very excited to be returning home with their many memories. After only sleeping in a bed once during the entire trip and spending the rest of the time in tents, all were excited about returning to their own beds and having home cooked food. I don’t think the majority will ever be eating porridge again!

It was an absolute pleasure to lead on this trip. Please keep your eyes peeled for details about future World
Challenge trips.
Rachel Keitch, Trip Leader