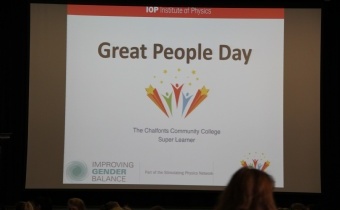 On the 18th September the Year 11’s participated in a Great People Day. The boys worked with the Great men organisation and the girls participated in speed-networking with inspirational women.

On the 18th September the Year 11’s participated in a Great People Day. On this day the boys had the opportunity to work with an organisation called Great Men. This organisation involves young male role models giving young men the tools to challenge stereotypes that they feel pressurized to conform to, to be informed about relationships and to make their own personal choices about what masculinity means to them. The girls participating in speed-networking with inspirational women including a lawyer, an IT consultant, a psychologist, bank managers, business women, an army officer, a detective, engineers, physicists and the Superintendent of Bucks police. There was also an inspiring talk from Jane Griffiths, the Company Group Chairman at Johnson & Johnson, as well as workshops on body image, team-work and coping with failure.

This forms part of the school’s Improving Gender Balance project with the Institute of Physics, which is researching gender and subject choice. The findings of which will help advance our understanding of this important issue.