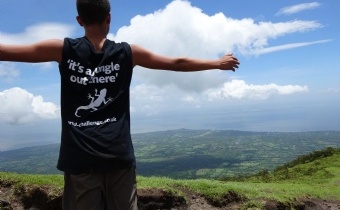 In July 2015, nineteen students departed Heathrow on a trip of a lifetime bound for Granada in Nicaragua. The challenge for the students started right at the beginning with a 2.5 hour delay.  They then arrived in country sixteen hours later with no luggage. The entire team spent the next 24 hours in the same clothes in high humidity and with the desire to shower.

Jumping and screaming with happiness at the return of their luggage and the thought of having a shower followed by putting on clean clothes, the team set off to hike two volcano’s on Ometepe island.  Then it was straight back to the mainland to embark on the voluntary project.

In a community where running water is in short supply as it is collected from rain water and where the toilets are long drops, the students fully appreciated the severity of poverty around the world. The project was to build a safe path for students to walk on during the rainy season which would ensure they attended school all year round. Working in temperatures of around 32C with high humidity it definitely pushed the challengers to maximum capacity but this did not stop them. They got stuck in and completed the project with pride and satisfaction.

Following this, the group travelled to Monteverde Cloud forest in Costa Rica where they zip lined the longest wire in Latin America at 1.5km in length.  They also tried some white water rafting. A few days relaxing and then it was time to come home.

Watch this space for World Challenge 2017!

C Fenner and A Loveridge