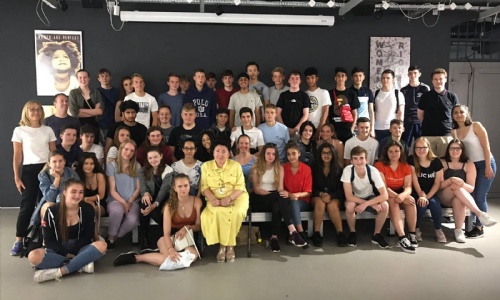 On Friday 6th July, 49 students from Year 10 waited patiently at Heathrow Terminal 5 to get on a plane to travel, for what was to be both an emotional and educational journey as well as one full of fun, laughter and comradery. For some of our students, to be on a plane was very exciting as they had never been abroad. As a surprise Ms Tahmazian arranged for those students to visit the cockpit and meet the pilot which made the trip extra special.

Upon our arrival, the students had some free time to look around the medieval town of Krakow. This included Wawel
Castle and the town square where the clock tower has a trumpeter playing each hour instead of the more traditional
peal of bells. After a night of fun and relaxation, we readied ourselves for the most surreal experience of Auschwitz the
next day.

Our Guides led the groups from barrack to barrack to look at simple displays of devastating intensity. We were told to reflect on the fact that every pair of glasses, every suitcase and hairbrush once had an owner. One of the most horrifying displays was a room with a glass cabinet of human hair banked in grey clouds that stretched the expanse of half the room. A lot of students were rendered speechless when they realised the scale of this evil against people just like them. This intensified as we stopped in front of one small glass display which contained children’s tiny shoes. The harrowing nature of the holocaust gained another layer as we realised that the atrocities against the Jewish race spared no one, not even children.

We were then escorted by bus to the second part of the camp known as Auschwitz II (Birkenau) which showed the massive scale of the tragedy with  hundreds of barracks, including the seven destroyed gas chambers. The Jewish people who were evacuated into this nightmarish place lived 16 to a wooden shelf, smaller than a table in width until they died of ill treatment or in a gas chamber, with no human dignity.  The daunting silence followed us throughout the visit, with no birds in the air as if nature itself was silent in respect of the 1.2 million people who died in the horrific gas chambers and inhumane living conditions on these soils over 60 years ago.

After such an emotive morning, we celebrated together with tears and screams of joy as England beat Sweden and qualified for the world cup quarter finals. ‘It’s coming home’ was heard not only by hotel staff but probably by all of Krakow and possibly the players on the pitch in Russia. However, our national pride could not take away from the sadness we felt from the horrors we had seen that morning. We felt our spirits lifted and looked forward to the future
whilst remembering the horrors of the past.

That evening we dined in a lovely Italian restaurant in the square and Mr Snoddy took the group to visit Krakow Park to enjoy the fantastic summer weather. On our evening walk, we saw the angry ‘Krakow Dragon’, a statue which actually
breathes fire when he’s annoyed, as James and Daniel learnt when they climbed on his tail!

On Sunday, we visited the Jewish quarter in Krakow and went to Galicia museum. This museum houses hundreds of pictures commemorating the memory and the heritage of the Jewish race since the Second World War. One of the highlights of the trip was a talk from a World War 2 Jewish survivor, Monica Goldvasser. Monica, whose parents bravely gave her up when she was just 18 months old in order to survive Nazi persecution, spoke about her survival.

The talk allowed students and staff to reflect upon how privileged they are to live in a country and College community which places enormous importance upon values such as tolerance and forgiveness. Monica herself was also noticeably moved by the appreciation shown by the students. She ended with a phrase which reflects on the evil we had seen by the Nazis against men, women and children ‘Never Again, Never Again must this evil happen’.
Paul Snoddy, Leader for RE